Are You Feeling Stuck? 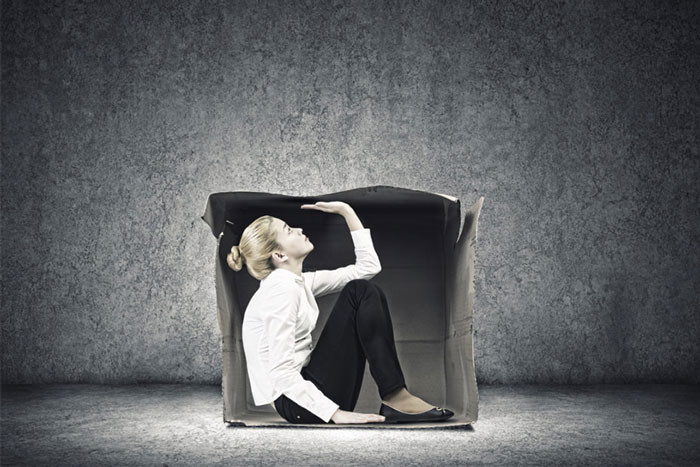 We all have an innate desire to expand and evolve. But after just a few weeks (or even days) of trying to instill a new habit or thought pattern, we often find ourselves back to our 'old' selves, even more defeated than before.

Are you experiencing an issue in your life that you want to change, but no matter how hard you try, it just keeps persisting? Perhaps it is a physical condition, a repeated behavior, a relationship problem, a career conflict, a nagging indecision, or any area where you are feeling wedged in a hard place. If so, don't give up. Read on to learn how you can activate a 'release' and resolve the issue once and for all.

First, some background about the nature of patterns:

Those stubborn issues are actually rooted in the subconscious. Buried there are core emotional patterns called 'limiting beliefs' that we developed in childhood as adaptive mechanisms, even preceding the memory of the events that shaped us. Whether we are aware of them or not, they drive the reality we experience in our daily lives and often manifest as stuck or repeated patterns.

A variety of factors contributed to these limiting belief patterns: your circumstances, the influence of others, and your family of origin. Usually these patterns have two things in common: 1) they were developed as coping or defense mechanisms at a young age, and 2) in our adult lives they have become dysfunctional and no longer serve us.

Regardless of how your belief patterns were formed, they have usually become so ingrained that they are near impossible to change even when we finally become aware of them. This means you will repeat patterns despite your best intentions, creating the same reality over and over. To the extent your core beliefs are limited, your ability to manifest fresh outcomes is also limited. This can be a major barrier in every area of your life, including personal relationships, the achievement of goals, and even healing or recovery from illness and injury.

In fact, the stuck patterns are such a critical component of healing on a mind-body level that I knew, as a whole health practitioner, I had to to focus on a solution to the 'mind' problem of the mind-body healing paradigm. In certain cases, I have found that no matter how much physical balancing we do with a person, their primary symptoms seem 'stuck'. I knew there had to be something that could work on a deeper, more causal energetic level, to help them finally release their core 'dis-ease.' And I found it.

You've probably noticed how you can sense the emotions of others just by hearing their tone of voice, regardless of their words (i.e. the classic "I'm fine" response when you call a friend and know immediately they are not fine). In fact, the audible tones in spoken voice are packed with subtle energetic qualities that can actually be measured and tracked. 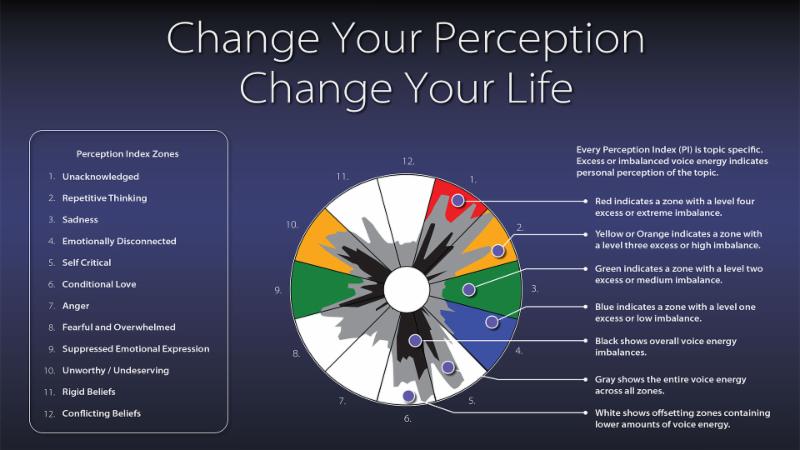 These qualities are directly correlated to the speaker's perception of the topic. Within one's voice is a treasure of information about subconscious emotional patterns that, when paired with biofeedback, can be used as a powerful tool for releasing those patterns.

And so with that, I am happy to introduce you to EVOX. Derived from the Latin word for "voice," EVOX is a transformative tool that measurese vocal tones, providing the visibility needed to both see and release the stuck core belief patterns all in the same session.

In a session, EVOX maps your voice tones regarding a specific topic to a Perception Index of 12 zones allowing us to identify your core limiting belief patterns. After analyzing the results for optimal resonance, EVOX then sends biofeedback into your body's energetic field providing the exact coherence required to release the stuck pattern. This process is repeated throughout the session in a series of rounds revealing a perceptual shift on-screen you can visually see as well as feel. 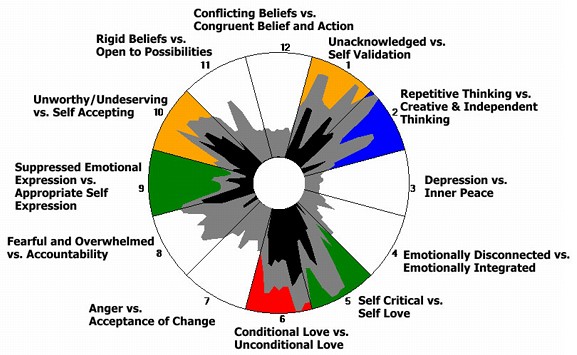 Who is this for?

What others are saying:

"EVOX was an incredible experience. I was not previously aware of being able to speed up the process of working through my limiting beliefs. Shakti made me feel so comfortable and relaxed as I closed my eyes and received biofeedback focused on what has been holding me back with my business and in my life in general. During the last round of biofeedback I felt a weight lift off that it was ok to be me and that I am enough. Remarkably the software showed the same shift that I was feeling. Since then I have felt so much more confident and my business has started to take off."
-Jenn W., Chicago

"My EVOX session was very powerful. This tool helped me to reframe my lack of belief in myself. By the end of the session I was much more relaxed & confident in my abilities to reach my goal. EVOX also provided me with 6 affirmation statements that nailed the issues I struggle with. I would highly recommend EVOX to assist anyone in shifting limiting beliefs."
-Laura H., Denver

"Since I did the Deep Dive series on my weight three months ago, I have lost ten pounds in a way that feels permanent and effortless. I feel like I am open to an expanded set of choices regarding my eating and that whatever 'energetic protection' I felt like I needed the weight to provide has been released."
-Anna G., Denver

Not sure where to start?

Simply book your Initial EVOX Session (75 minutes) and we can together evaluate the best course of action to help you transcend the areas where you feel stuck, so you can have fresh perceptions, new peace of mind, clarity, and better health.

We can determine one or more different EVOX approaches to help you get the transformation you desire:

Are you ready to finally break free? Click here to book your EVOX session now.